The Fall of Tibet to Communist China


The Dalai Lama was born in a village called Taktser on July 6, 1935. His parents were peasant farmers. There were 'signs' that led to him being recognized as the reincarnation of the thirteen Dalai Lama. Because of these signs he would be enthroned as a spiritual leader of Tibet at a very young age.
In 1950 the Chinese invaded Tibet. The Dalai Lama sent an appeal to the UN on behalf of the Tibetan National Assembly. It was never answered.
The situation worsened. At the age of sixteen, he found himself leading a nation of six million Tibetans faced with war. It was impossible to avert disaster. He sent delegations abroad to the US, Great Britain, Nepal, and China. All refused but China. Tibet was left to face communist China all alone.
In 1954, the Dalai Lama was invited to visit China and meet President Mao. He went accompanied by 500 people. His people of Lhasa feared for his life. He met President Mao, who seemed sincere to want real cooperation. The Dalai Lama had a dozen meetings with Mao. On his last visit to see Mao he said, "Religion is poison. It undermines the race and it retards the progress of the country." All of a sudden the Dalai Lama was very afraid.
He returned to Lhasa where he was welcomed by thousands of followers. Their religious practices continued undisturbed until the summer of 1956.
The alliance of popular leaders was having success; several sections of the Chinese military road had been destroyed and bridges. The Chinese responded with violence. They sent planes and bombed Lithang Monastery. His Holiness broke down in tears. After the bombing came the torture and execution of the wives and children of the freedom fighters, as well as untold atrocities against monks and nuns.
The Dalai Lama became convinced that Mao was nothing more that a "destroyer of the Dharma." The Dalai Lama was determined to oppose any violence on the part of the Tibetan people. His people were losing confidence in him as a political leader.
In 1959 the Dalai Lama was pressured to attend a theatrical show by the Chinese. His Holiness accepted the invitation, everyone thought this was suspicious and that his life was in danger. On March 10 , 30,000 people of Lhasa protested. They came to protect the Dalai Lama- shouting, "Chinese out of Tibet!"
The Dalai Lama felt caught between two volcanoes and asked the Cabinet to inform the Chinese General, His Holiness, would not be able to attend the play. General Tan Kuan Sen accused the Tibetan government of organizing the agitation against Chinese authorities.
In the days that followed, the crowd was becoming hysterical. The Dalai Lama recieved a letter from the General that the Chinese were getting ready to attack the crowds and bomb the Zorbulingka.
On March 17, 1959 the Dalai Lama left Tibet dressed in trousers, a black cape, and a rifle slung over his shoulder. His appearance was that of a soldier. Into exile he went to India.

International pressure is vital to the restoration of Tibet. More and more people in the world are becoming aware of the Tibetan problem. It is the longing of the Dalai Lama to return to Tibet and restore peace.
Reference ~The Dalai Lama's Little Book of Inner Peace

Posted by Madison Meadows at 11:15 AM

Email ThisBlogThis!Share to TwitterShare to FacebookShare to Pinterest
Labels: Articles

Many times my heart would burn and break.  It would burn at the sight of you and break when you departed.  This would continue like so; until one day the burn was unbearable.  I gave 'way' to the burn and my heart melted.
Posted by Madison Meadows at 9:46 AM

My Letter To God


Dear God,
Me and you have come a long ways since we began this journey some 13+ years ago.  I'll never forget that night spent sobbing on the bathroom floor asking for your help.  Help you did!  You answered my plea and have been by my side ever since that first meeting took place.  I am so grateful for your gentle wisdom and encouragement you've given me over the years.  Some things I still struggle with, but knowing you're there to see me through it, makes the journey easier.  Now I'm almost 35 years old.  I'm learning more and more about myself everyday.  I still need you just as much as the fateful day.
Today I am faced with a huge burden that's been going on for a year.  I only pray God that an answer comes soon and by your mercy our family has even more time and memories to make right here.  We've grown fond of this old house.  It's now filled with laughter and pitter patters of tiny footsteps.  The birds and bees have made a home for themselves here.  Oh how I appreciate their presence.
So what I am asking for is more time in our home.  I feel blessed to have such a loving family, a job I like, and friends who care about me.  Thank you for listening.
Love,
Me
During this time in my life my husband and I were going through a loan modification. I stayed strong in my faith but needed an end to it all. My prayer was answered three months after I wrote this letter.
Posted by Madison Meadows at 1:40 PM

Email ThisBlogThis!Share to TwitterShare to FacebookShare to Pinterest
Labels: My Letters

The System of the Kundalini 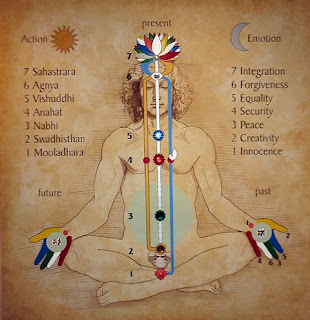 In the subtle body there is the main conduit of Kundalini, called sushumna nadi, which is located similiarly where the spinal cord is to the physical body.  It is the major channel the creative energy of consciousness flows through as it manifest the universe and personal experiences.  It is also a storehouse of all karmas.  Patterns of thinking, feeling, acting, relating, and creating are built up over lifetimes and reproduced again and again.
To become liberated or enlightened requires becoming free of those samskaras.  The Kundalini moves through the sushumna nadi "erasing" the impressions stored there and releasing the energy bound up in them.  This purification process then releases us from the patterns in our lives created by those impressions.
She also opens up states of consciousness that give us access to what some call God-consciousness.  In order for the state of unity consciousness to become stable and fully manifest in the individual's mind, body, and actions, the nadi and all the lesser nadis must be purified.

Reference~Kundalini Rising Exploring the Energy of Awakening
Posted by Madison Meadows at 10:13 AM

Email ThisBlogThis!Share to TwitterShare to FacebookShare to Pinterest
Labels: Kundalini

The Quality of Being Sought

It's not in seeking for the sake of possession.  The quality of being sought lifts the veil to the Divine.  Only the fire in one's heart can burn away the cloak of time.
Posted by Madison Meadows at 11:02 AM

The Place of Ease

I stand by the shore watching the wave break against the rock. This movement goes on and on between the two. The place of ease comes naturally to them. I am in awe knowing this; that I am in the midst of God.
Posted by Madison Meadows at 2:29 PM

The Fragrance of Truth

I strayed upon the path of God. I was warned not to look back. If I looked back I would see Satan. I was now on the path where Satan could not come with me. I kept walking; the fragrance of truth was inviting me home.
Posted by Madison Meadows at 10:06 AM