Dream of Coronavirus: The Next Wave

My ex mother-in-law came to me urgently. She had a message for me. "The next wave that's going to hit will close a lot of small businesses for good."

Morgan Stanley's recent COVID-19 forecast released Monday said that the largest risk to the US is "a second wave of infections emanating from the central region of the country after the coasts have peaked in mid-April."
This wave, the report continues, could delay the US "peak" and cause recontamination of the coastal cities even after they see cases decline.
Scott Gottlieb, the former US Food and Drug Administration commissioner who's now a resident fellow at the American Enterprise Institute, said on Twitter that the coronavirus is now a "national epidemic with multiple epicenters."
Pointing to cities like New Orleans, Philadelphia, and Dallas, among others, Gottlieb said that cities nationwide are seeing reported cases double every three to four days.

In Philadelphia, which had 890 reported cases of COVID-19 as of Monday morning, hospitals are bracing for the worst to come as reported cases of the virus keep rising.
"We anticipate we are no more than two weeks behind New York City," P.J. Brennan, chief medical officer of the massive University of Pennsylvania Health System, told The Philadelphia Inquirer. "Cases are doubling every two to three days. We had 46 confirmed cases last night. You do the math."
And hospitals across the US are already facing massive pressures on hospital resources, or preparing for the possibility of it in the coming weeks.
New York Gov. Andrew Cuomo, whose state has so far been hit the hardest by the coronavirus with over 60,000 reported cases, has resorted to suggesting that hospitals in the state split ventilators between two patients amid the current shortage of the machines.
Last week, NewYork-Presbyterian Hospital started to do just that, despite the risks involved.
"No state, no metro area will be spared," White House Coronavirus Response Coordinator Dr. Deborah Birx told NBC News' Chuck Todd at a Meet the Press on Sunday. "We are asking every single governor and every single mayor to prepare like New York is preparing now."

Documentary on the Origin of the Coronavirus. MUST SEE!! https://youtu.be/3bXWGxhd7ic
Reference~  https://www.bing.com/news/search?q=Headline+The+Next+Wave+In+The+Coronavirus&qpvt=headline+news+the+next+wave+in+the+coronavirus&FORM=EWRE
by Yeji Jesse Lee
Posted by Madison Meadows at 3:39 PM

The Awakening is Happening!!

Posted by Madison Meadows at 3:41 PM

The Spirit of Jezebel: The Narcissist, Part 2

How To Identify A Jezebel Spirit (Narcissist):

1.  Refuses to admit wrong doing. To accept responsibility would violate the core of insecurity and pride from which it operates.

2.  Takes credit for everything.

3.  Uses people to accomplish her/his agenda. Let's others do her/his dirty work. The Jezebel gets another's emotions stirred up, than lets that person go into a rage.

4.  Withholds information. The Jezebel spirit is a form of witchcraft. The Jezebel loves to control other people.

5.  Jezebel is threatened by prophetic ministry. Reason being someone with a prophetic gift will be able to identify the Jezebel spirit and will attack it.

6.  Volunteers for anything. Does projects for recognition. Her/his motives is never pure.

7.  Lies. A person with a Jezebel spirit will lie even when they don't have to and are hard to detect. She/he can make you believe anything she/he wants to through manipulation.

8.  Ignores people. They will ignore you when they disagree with you.

9.  Never gives credit or gives gratitude. She/he cannot acknowledge or go out of her/his way when someone has done something right.

10. Criticizes everyone. Characteristic of a controller. She/he has to be the one that looks good.

11. One "up"menship. Jezebel feels threatened by anyone who steals the lime light or to anyone whom is a threat to her/his power or control.

12. Spiritualizes everything. Explaining it off as God. This prevents her/him from owning up to responsibility required of her. The implication is always, "You've got a problem, I don't."

13. Insubordinate. Her/his main desire is for control and power in work and in relationships.

14. Is pushy and domineering. A person with a Jezebel spirit pressures you to do things.

15. Uses the element of surprise. Likes to catch you off guard, feels a sense of control by doing so.

16. Sows seeds of discord. It is common for her/him to tell half-truths to implicate another person in your eyes. Will also isolate you from your family and friends.

17. Commands attention. When someone else is recognized, she/he will quickly undermine the person's accomplishments verbally.

18. Vengeful. If you contradict or confront one, get ready to become her/his worst enemy. You are target of her/his fiercest venom. A Jezebel will stop at nothing to destroy your reputation.

19. Attempts to make you look like the Jezebel. If the person is confronted, she/he will skillfully twist the entire situation, trying to make the innocent person look like the one who is attempting to control.

20. Insinuates disapproval. A Jezebel will often imply disapproval to those under her/his control. The controlled person feels no freedom to express an opinion.

21. Knows it all. Quick to express her/his opinion in any area.

23. Gift giving. Loves to give gifts as a form of control as the Jezebel uses gifts to make you feel obligated to her/him.

24. Independent. No one has the right to tell her/him what to do.

25. Religious. She/he will behave like she/he is holy or a Christian, but they are not.

26. Hides. The person may seem normal for a period, exhibiting none of these classic traits. Then suddenly without warning a situation will arise, once again with the spirit of Jezebel taking control and wreaking havoc over lives.

The Spirit of Jezebel- Part 1

The following is from Lyn Leahz Ministries. In her research she shows the similarity in symptoms  of the Jezebel spirit to a NPD (Narcissist Personality Disorder) type. You can listen to her full commentary on the youtube link below.

Jezebel was a she devil, a heartless woman. The spirit of Jezebel disguises itself as a good person, but is a very evil person. Jezebel was a heathen woman that married Ahab, the king of Israel.(1 Kings 16:31) Ahab was fascinated by her beauty and forcefulness of character, and fell for her. Ahab went and erected an alter for Baal, worshipping and serving Baal. Jezebel was ambitious and proud, eagerly she seized the opportunity to share the throne of a king. By doing so, Jezebel seduced God's king of Israel with her beauty, wittiness, and charm. Spiritual and moral disintegration was brought on by Jezebel's determination and effort to destroy the worship of Jehovah.

Jezebel possessed an extraordinary force of character. She was a ardent adulterer, a dominating wife, a corrupt tree, a treacherous schemer, and she loved personal adornment. She died a horrible death. She fell out of a window and was eaten by dogs. 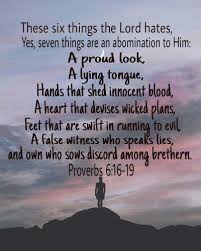 The spirit of Jezebel is very active in the world and is destroying lives. This spirit has been responsible for tearing down many churches, pastors, people with prophetic ministries, and is responsible for breaking up many marriages, friendships, companies; along with getting people to commit murder and suicide. It is a very dangerous, evil, wicked spirit. (1 Kings 18:4-19)

The Union of Shiva and Shakti

Posted by Madison Meadows at 11:30 AM

Posted by Madison Meadows at 4:10 PM