My Past Life Dream: A Monk and Nun 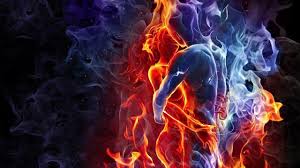 It is an older time- buildings are rustic, roads are all dirt, everyone is dressed in ancient cloth-like garments.There are two groups. One of men and the other of women. A young white woman kneels down. She is allowing someone to cut her long hair. The woman gave her life over to God and committed to the monastic life.
A young white man has arrived with nothing but the clothes on his back and has also committed his life over to God. Even though the man and the woman are in proximity of each other, they have not yet recognized their connection. They both have the same longing in their heart and are destined to meet. Each reflecting back the wisdom and truth to the other.

In this dream, my consciousness is witnessing this event from above. I see the drama play out and feel the longing and love that this man and woman have for the Lord. It is very powerful and moving. I also am aware of their meeting that is to take place. The meeting is a part of God's plan. As I am watching the woman's hair being cut off, the man is nearby. There is a knowing that these two must meet.

This dream is about twin flames meeting and the alchemy work that needs to be performed in order to satisfy their longing for God. The sexual energy between a man and woman can be a catalyst for self realization. Nuns and monks take vows of chastity, poverty, and obedience.


These days monks and nuns are always single. They ignore that a true monk needs a nun. A real nun needs a monk. How can you have one without the other? How can a monk learn what love is, if he suppresses his attraction, his devotion, to a woman? Likewise, how can a nun learn what love is if she avoids her feelings towards a man? The natural attraction between man and woman reflects the creative powers of the divine. The most powerful force within us is sexual energy, which is best used in a loving relationship.

Reference~Gnosticteachings.org, Beginning Here and Now: Four Ways of Spiritual Life
Posted by Madison Meadows at 10:35 AM

Email ThisBlogThis!Share to TwitterShare to FacebookShare to Pinterest
Labels: My Past Life Dreams

It is France and the year is 1342.  There is a couple in their mid to late 20's.  They are watching an erotic play.  She spoke up and said it was artful and that the woman in the play sang beautifully.
He wasn't suppose to be with her. They were from different social classes. She was from money and he was not.  He was taken into custody by a group of men and found guilty for a crime he did not commit.  The punishment was torture.
He was tortured in front of a crowd and she watched in horror from a distance. They were in love- he didn't complain about being tortured and she wanted justice.

Although most ordinary individuals are unaware of it, we exist in a constant play of cosmic forces.  When one becomes aware of this play, and then is able to consciously participate in the play of spiritual forces.  Metaphysically speaking, every move we make, circumstance, event in our lives, every thought, imagination, feeling, word, and deed- is supported by a corresponding spiritual force.  We attract and connect ourselves with spiritual forces beyond us, and we become agents of those forces in the material plane, whether for good of for ill.

Reference~War of the World Views by Deepak Chopra
Posted by Madison Meadows at 1:03 PM

Email ThisBlogThis!Share to TwitterShare to FacebookShare to Pinterest
Labels: My Past Life Dreams

My Past Life Dream of my Husband

My husband and I were going through a rough time in our marriage. I had prayed for insight to our problems and this is the dream I had. In my mind's eye I could see his face throughout the dream. Both men represent aspects of my husband.
From Journal Entry 12/4/2008
I'm in the Middle East, late 1800's. I'm there for a short time. I have traveled here by myself from the states. I am there as a journalist. I have a fiance in the states. I don't want to marry him. He has political power. He is controlling and very charming. The ruler of the country I am in notices me. He tries to persuade me to stay with him. I don't wish too. There are merchant tents in the hub where I'm at. I walk around to look at dresses. A Victorian dress catches my eye. It is ruby red. I try the dress on. I see this as my wedding dress. I take it off and cry. When it is time for me to leave, the ruler of the country tries to stop me. He sends his men after me. I wake up.
I knew this was unresolved karma we needed to work out. I shared this dream with my husband. I asked him if he felt I didn't want to marry him. His response was in fact yes. He felt I married him for other reasons. I reassured him that I did want to marry him and I deeply loved him. We were able to also talk about the other issues of the dream. I did in fact feel controlled by him and needed more space. Our relationship moved into a new direction from there.
Old fashion clothing and background setting is a clue on whether or not your seeing a glimpse of a past life. The theme that repeats itself most in these dreams is one of failure to forgive, trust, or love another in a previous lifetime. This is a reoccuring block with that person. The dream may depict original cause of the problem so you may understand and forgive.
Notes~the Victorian period was between 1837-1901
Resources~The Mystical Magical Marvelous World of Dreams, Wilda Tanner
Posted by Madison Meadows at 12:26 PM

Email ThisBlogThis!Share to TwitterShare to FacebookShare to Pinterest
Labels: My Past Life Dreams
Older Posts Home
Subscribe to: Posts (Atom)