He grew with his angel,
and suckled at her breast.
Two worlds apart,
unable to join them together.
Posted by Madison Meadows at 6:43 PM

She lives in a world
only she understands.
Her pain buried deep
scars on her hands.

Her wings clipped
by others abuse.
They serve no purpose
no longer used.

Her dreams
to rise above it all.
Instead she only
continues to fall.

The years of neglect
have left her lost.
She'll risk everything
at all cost.

She yearns for a heart
mended not torn.
She waits til the day
she can be reborn.

Posted by Madison Meadows at 6:32 PM

He lured her there,
Enticing her spirit.
The dance had its own rhythm.
Its movement followed the scent
of animal instinct.
The energy invoked was primitive.
She had memorized the dance.
This ancient ritual had its own language.
It took on a force of its own.
The urge possessed them both.
The heat from the sun,
she possessed.
The moon he owned.
When both their worlds merged,
a new one was born.
Posted by Madison Meadows at 12:53 PM 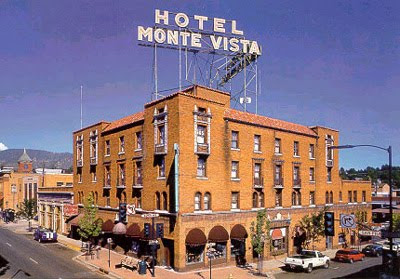 My husband and I are in our Suburban. We're four-wheelin' in a canyon. The ride is smooth, the scenery beautiful. We're both engrossed in the scene and we don't notice the drop up ahead. It's too late and my husband jumps out. In slow motion, I prepare myself for the fall. I say, "Okay here we go God." As the vehicle slowly hits the canyon floor, I release my seat belt and fall to the ground about 50 ft. I think I have survived. I do not move.
This dream felt so real that I didn't ignore it's warning. I kept the dream in the forefront on my mind. My husband and I got married on Christmas Eve in 2002. We decided to go to Vegas for our Honeymoon but not until April. We happened to be in Vegas Easter weekend. We left Vegas on Easter and headed back home.
We had just acquired a 1987 Four Runner a week before our trip, and decided at the last minute to drive it. We were on the I-40 East and we were 3 hours from home. When we got to the exit for Flagstaff we pulled over and flipped a coin. Heads we go home, tales we go to Flagstaff. It was tales, so we drove on to Flagstaff.
When we got to our Hotel Monte Vista in Flagstaff, we talked about waking up in the morning and driving on to the Grand Canyon. We went out to dinner where I had a couple glasses of wine and we went to the bar inside the hotel. We had conversation with the bartender and he told us the hotel was haunted. My husband shared with him how his grandfather was a bartender at the same bar back in the day. We only stayed a short time and headed back upstairs to our room.
That night we got the video camera out and my husband video taped me jumping on the bed. I played on the ghost stories we heard earlier and began mocking the spirits. (I was foolish and drunk.) I remember lying down and getting back up in the middle of the night to go to the bathroom. I was feeling sick. I don't remember anything after that. I had blacked out and my husband was holding me calling out my name when I came to. He said it scared him so bad he wanted to call 911. I had told him not to.
The next morning I was still groggy and had a pounding headache. I just wanted to go home. We packed our things, ate breakfast, and left. We were southbound on the I-17 30 miles when without warning our left rear tire blew. We began flipping several times. It seemed like it was happening in slow motion. I remember grabbing the handle above my window and saying to myself, "Okay here we go God." The roof "V"ed in and the driver's side window shattered. My husband hit his head on the roof and his elbow grinded against the asphalt. When the vehicle finally did stop we just looked at each other and said, "Are you okay?" We were amazed that we alright. We released our seat belts and climbed out through the broken windshield. A woman was racing toward us shouting, "Is everyone okay?" She happened to be an off duty nurse.
We were both taken to Flagstaff Medical Center where my husband spent 3 days in ICU. The steel from the roof of the Four Runner had left him with a huge gash to his head with his skull exposed. His left elbow had been grinded down to the bone. I only had a small bruise on my shin. The nurses were in disbelief that I had no injuries from such a violent accident.
Reflecting back we were very fortunate to be alive. Because we drove an older model Four Runner it had the Roll Bar in it. The four runner had flipped a total of 5 times. During the event it landed on top of the guard rail, and proceeded to flip down the highway. If we had gone over the guard rail, it is a straight drop down to the canyon floor. My husband shared with me the story of how his grandfather (the one who had worked at the hotel bar) had died on that same stretch of freeway in an automobile accident. I told my husband I felt a presence with us that day. Maybe it was his grandfather.
Whether or not mocking the ghosts from the night before had anything to do with the accident, I don't know. One can only speculate. Needless to say I have respect for the dead now.
Posted by Madison Meadows at 10:47 AM

Email ThisBlogThis!Share to TwitterShare to FacebookShare to Pinterest
Labels: My Dreams

I long to be transformed
spirit renewed
A polarity of opposites
battling it out inside of me
My worst fears speak to me
Their language sets my soul on fire
Engulfed in flames
my flesh falls away
I am bones
I am horrified
The ringlets of stench
rise in the air
The pungent smell is repulsive to me
It is more than I can bare
My bones fall away to the earth
I am spirit
Still moving about
No pain
A butterfly perches on my bones
Flapping vigorously its wings
Inviting more to come
I watch in wonderment as a colorful
blanket covers what's left of me
I think how beautiful the display
I forget about my fear
I am in complete awe
I imagine my spirit being the butterfly
My soul takes flight
Wings of gold, red, yellow, and blue
are my attire
I leave behind what is left of me
No sadness
The sky calling me
I fly towards the sun
A renascence of knowing
I am returning home
Posted by Madison Meadows at 4:54 PM

She lays there,
Preserving the way of the living.
Grief pounding at the door,
She mourns no more.
Posted by Madison Meadows at 4:47 PM

My first inhale is of you.
For a moment I am complete.
My first exhale escapes me.
I try to chase its essence.
I fail to recognize-
that where it all began,
it all will end.
Posted by Madison Meadows at 4:41 PM

How to Astral Project

Astral projection is an out of body experience. This is a basic step by step guide to willfully dissociate consciousness from the physical body. There's a lot to gain from astral travel. The possibilities are limitless. The astral world is made up of thought forms of human desire and imagination.
You want to have a clear space with no distractions. It also helps to be at your best physically. Being healthy aids in the flow of energy. The key to a successful journey is intention and relaxation. It will be more helpful to focus on where you are going. When targeting a person or place in ordinary reality focus and try to hold the image of the person or place you have in mind. When you are fully relaxed:
1. Visualize your second self
2. Notice details of yourself
3. Let your consciousness flow to your second self
4. Scan the place around you
5. Move about the room
6. Consider further explorations in your new vehicle.
Move through your house, the neighborhood, or you may target a person or place at a distance and journey to them.
My experience with leaving the body is I usually feel a sudden jolt. At first you may feel frightened when there is the realization that you are detached from your body. Then the next thing that will happen to me is I'll feel like I'm zooming upwards through a tunnel of stars at lightning speed. Within a few seconds I will arrive at my destination.
There is a vast amount of knowledge located on the astral plane. There are esoteric schools, libraries, the house of time (where you can travel backwards and forward in time), and much more.
Conscious dreaming is an excellent preparation for the challenges that lie before you in this life and for the challenges of the journey you will make after death.

Email ThisBlogThis!Share to TwitterShare to FacebookShare to Pinterest
Labels: My Astral Projections

I watch the river as it flows by,
branches glide on its surface.
Stillness surrounds me-
I am in my being.
Observing,
Witness to its movement.
Direction,
Coming and going.
I am empty.
No space to occupy my thoughts-
I watch them pass by.
I tend to no thing.
I don't have to-
My spirit requires nothing.
Posted by Madison Meadows at 2:01 PM