My Letter To Sebastian- No. 2 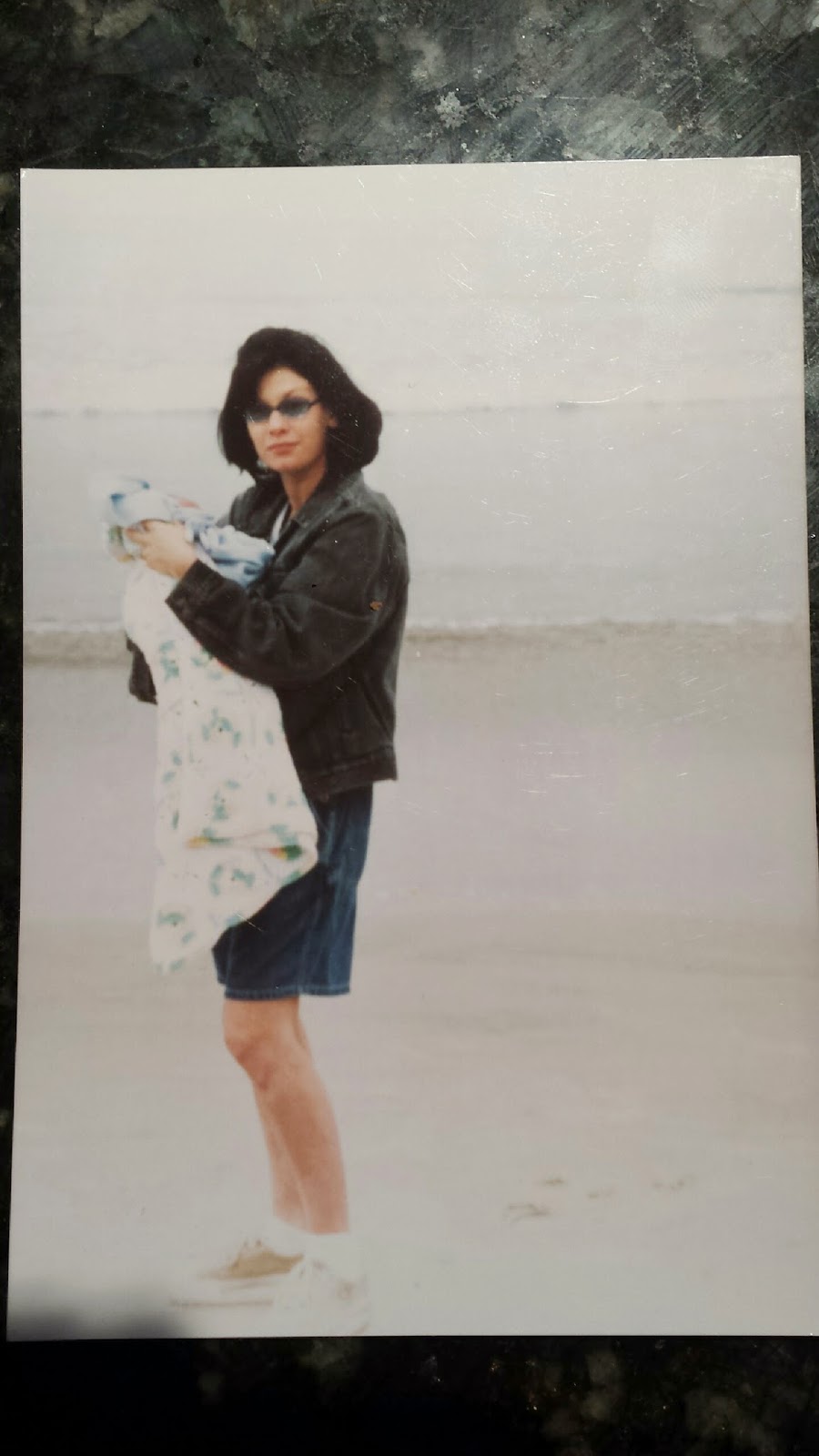 I had a dream about you.  In the dream you wanted to know more about your mother.  I explained to you that her drug use started shortly after I met her.  It only escalated after you were born.

At the time when I met her, she radiated life.  She was very charismatic, very artistic, just a very colorful human being.  She was a very beautiful woman that other women envied for her beauty.  Her intelligence could out wit or trap a man. This is how I once knew her.

Then her drug addiction took over her life completely.  Her hidden traits and darker parts of her soul consumed her.  All the beauty was gone.

Sebastian, your mother had the presence of mind to give you up because she knew you deserved a better life.  She did this because she loved you.

There is so much about her that is a mystery to me.  Over the years I have tried my best to keep tabs on her.  I pray for her everyday. I pray she finds God and lives long enough to be reunited with you.

Your mother often dropped you off and I would look after you. You were the whole reason that I wanted kids of my own.  Now your cousins are seven and ten years old.  They hear me talk often about you.  How I hope you get to meet them someday.

You are a precious gift to the world.  Never forget you are dearly loved.  God bless you Sebastian.

Love you with all my heart and soul,
Michelle
Posted by Madison Meadows at 5:26 PM

Email ThisBlogThis!Share to TwitterShare to FacebookShare to Pinterest
Labels: My Letters

Be annoyingly well informed my Friend!  When the Beloved comes with news it is the break of the wave on a rock, the sound of a bird's flapping wings, the moon's silent retreat in the night sky.  All things of utter importance convey the same message.

There is a constant love play going on everywhere; reminding you that love is all there is.
Posted by Madison Meadows at 8:26 AM

The ark, or physical body, was once considered sacred by all ancient religious traditions. The animals of the Noah story represent these germs of all living things, the sperm and ovum contained within the physical body.  These germs within man and woman are represented by the "male and female animals" stored within the "ark".  These primordial root elements can provide physical life or spiritual life, depending upon the usage.

Physical death does not guarantee purification and salvation, since this is something internal, beyond the physical world.  Despite the sufferings, difficulties, and sacrifices involved by walking this path, it is the only one that results in the complete development and liberation of the soul.

It is only once our internal psychological filthiness is eradicated by the flood water of spiritual practice that Elohim can establish a new heaven and a new earth.  The heavens representing a pure state of consciousness and the earth referring to purity within one's physicality and mind- the temple of the divine.

Reference~ gnosticteachings.org
Posted by Madison Meadows at 11:03 AM

"The length of the tebah shall be three hundred cubits, the breadth of it fifty cubits, and the height of it thirty cubits." Genesis 6:15

These letters represent the work that must be done in the physical body in order to achieve liberation.

The letter Shin relates to the trinity the 3 primary forces.  It is the creative fire at the base of life.  A power of creation inherent in every atom, a power we must harness and direct towards liberation.

The letter Nun is life in movement, the "fish" or living power of sexuality.  By harnessing that force, we can achieve the "second birth."  Jesus spoke often of the "living water."

The letter Lamed is the staff of Moses, rod of Aaron, which represents the creative fire of the letter shin raised upon a pole as a brazen serpent, like Moses did.  The creative fire, raised up the spinal column.  In the East, this is called kundalini.

Spiritual illumination is produced by an abundance of inner light.  That light is radiated from the fire, the letter Shin, which represents the fundamental trinity of forces in all things.

The story of Noah represents an alchemical process of transmutation in which the base matter is purged and purified.  All that is impure in us must die, while the purity must be developed and perfected.

John Collier painted this portrait of a Greek Baccante with her symbolic items: the skin of the slain animal desire, the wreath of victory on her head, and in her hand, the staff topped by a pine cone, symbol of the awakened pineal gland, the "seat of the soul," the "eye of Brahma," or in other words, the source of spiritual vision. 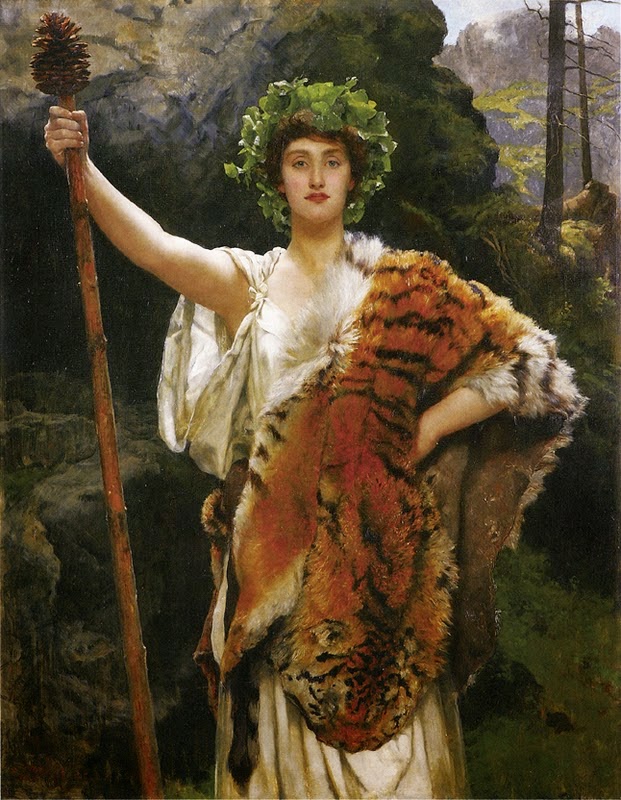 The Ark represents stages of development of the "body".  Genesis 6:14 "Make thee an ark of gopher wood; rooms shall thou make in the ark, and shall pitch it within and without with pitch".

In Hebrew the first two letters can be interpreted as "wood" or "tree".  The two trees of significance in the Bible are written with the Hebrew "ets" the tree of life and the tree of knowledge of good and evil. Pitch refers to how the vessel is hermetically sealed, to keep the impure flood waters out.

This whole story started with the abuse of the tree of knowledge.  It is why Adam and Eve had to leave the garden.  Thus, the way to return is by the same tree.

"Now the man knew his wife, Eve, and she conceived and bore Cain..." Genesis 4:1  In the Bible, knowledge implies sexual knowledge.  Moreover, it is related to fire:  sexual desire is a "burning" energy.  The tree of knowledge of good or evil is dualistic, meaning sexual energy can be good or evil.  To build the ark, to return to Eden, one has to know how to use the tree in a good way.

"...qenim shalt thou make in the tebah..." Genesis 6:14  In English qenim is translated as "room", but actually it is plural for reeds, canes, or stalks.  It is an ancient symbol of the spinal column of a spiritually developed person.  It is plural here because the work to create the Ark is a collaboration between man and woman.

The spinal cord is the conduit that transmits all the energies of our nervous system, and supports the energetic channels between our sexual organs and our brain.

Posted by Madison Meadows at 1:02 PM

The word iysh "fire" with the letter iod in the middle represents someone who is following the commandments, obeying the pact of fire (sexual purity), who stands in the midst of the fire of the furnace and is not burned (Daniel 3).  Furnace is etymologically connected to the word "fornication".

By preserving our inner Noah, our divinity can purge the impurity that traps us in suffering.  That inner fire, Noah, has to be protected in the ark-anum- the secret knowledge- within which he will float upon the waters that consume all impurity.  The water and the fire work together.

Reference~ gnosticteachings.org
Posted by Madison Meadows at 11:53 AM