Kahlil Gibran and May Ziadah in Love 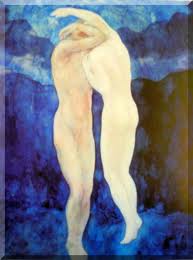 May Ziadah was a regular contributor to leading newspapers and periodicals of her age.  Her work as a reviewer of new literary work introduced her to Kahlil Gibran, whose influence on her thought and style can be seen everywhere in her works.  Although the two had only known each other through correspondence, a fascinating literary and love relationship came to exist between them:  they seemed to have achieved a harmony and understanding rare even among people who are more intimately connected.


Her home was in , her interest and passion was in the Woman’s Emancipation Movement.  Her real achievement has been in the art of the essay.  She is the most significant woman essayist in the Arabic literature of the first half of the 20th century.


Kahlil and May were both Lebanese writers living in different parts of the world.  They knew one another solely from the letters they exchanged and from each other’s work; they never met except in their imaginations and dreams, through the roaming of their spirits in search of eternal reality and of each other as kindred souls.


The love letters between Kahlil and May began in 1912 and continued right up to Kahlil’s death in 1931.  At first the letters took the form of literary correspondence.  The relationship changed from mutual admiration to a firm friendship, than to the final admission of love.  Kahlil and May were united in a Sufi yearning and striving towards the “God Self.”  The “Blue Flame,” which Kahlil used as the symbol of God in man, also became the symbol of his eternal love for May.  The two lovers joined in a spiritual procession towards the Blue Flame, the eternal flame of reality.  For him love needed no words to express itself because it was a serene hymn heard through the silence of the night; the mist and essence of all things.


Kahlil felt that man’s only path to self-realization lay in Love.  In his first book, The Madman, the only sane person able to remove his masks and look reality straight in the face is considered a madman by his fellows.  In May he found in one person the incarnation of everything that his soul yearned for. The sketches and drawings on the sides of many of his letters to her show how much at ease he felt with her, and how near to him she was.