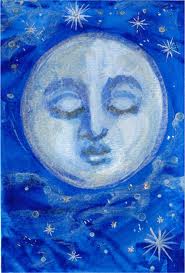 I find myself in my astral body.  I say that I want to fly past the five moons and the five suns.  The stars I see in the sky are amazing!  As I approach the first moon I am joyfully repeating, "Beautiful moon, beautiful moon!"  I think to myself this is a long journey.  I can see the second moon.  I am almost to it.  I suddenly wake up in my body.

The prophet Issiah says, "The sun shall be no more thy light by day; neither for brightness shall the moon give light unto thee: but the Lord shall be unto thee an everlasting light, and thy God thy glory.  Isa 60:19-20

Kabir says that if you want to encounter God you have to travel past the stars, the five moons, and the five suns towards your true home.  Pass through the sky and the star; take courage and cross also the inner sun and moon, then you will be able to reach and place your head at the doorstep of the Lord's court.

Reference~ Kabir The Weaver of God's Name
Posted by Madison Meadows at 10:39 AM

Email ThisBlogThis!Share to TwitterShare to FacebookShare to Pinterest
Labels: My Astral Projections

Gone From My Sight 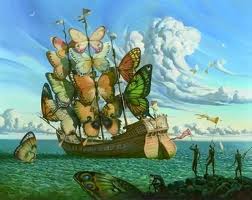 My dear neighbor and friend, Ed Santilli passed away March 4, 2013.  At his memorial was this eulogy by Henry Van Dyke.  The passage is the most beautiful expression of death I have ever read. Where one journey for the soul ends; becomes a new beginning just in a different form.

I am standing upon the seashore.  A ship at my side spreads her white sails to the morning breeze and starts for the blue ocean.  She is an object of beauty and strength.  I stand and watch her until at length she hangs like a speck of white cloud just where the sea and sky come to mingle with each other.
Then someone at my side says: "There, she is gone!"
"Gone where?"
Gone from my sight.  This is all.  She is just as large in mast and hull and spar as she was when she left my side and she is just as able to bear her load of living freight to her destined port.
Her diminished size is in me, not in her.  And just at the moment when someone at my side says:  "There, she is gone!"  there are other eyes watching her coming, and other voices ready to take up the glad shout: "Here she comes!"
And that is dying.

Posted by Madison Meadows at 12:21 PM

Email ThisBlogThis!Share to TwitterShare to FacebookShare to Pinterest
Labels: Wisdom

The Story of Sapphire and Arion: Arion the Warrior

Arion walked his own path.  Anyone who crossed paths with him knew he was a man with only a few words- he led by example. He considered himself a simple man but often was misunderstood.  Arion's detachment from others was his way of showing true compassion.  Arion had one foot in the physical world and had the other firmly in the spirit world.  He was learning to balance both his inner and outer life.  He inflicted no harm on others or nature.  His morality was another man's immorality.  Arion realized himself by realizing he doesn't know.  Surrender was his path to truth and he would protect the truth like a true warrior.
Posted by Madison Meadows at 2:39 PM

Email ThisBlogThis!Share to TwitterShare to FacebookShare to Pinterest
Labels: The Story of Sapphire and Arion

You pretend to know how to die to ego but you have yet to offer your head in the market place.  Your diamonds are of no value to the Beloved.  The Beloved demands you cut off your head.  That is the price of divine love.
Posted by Madison Meadows at 2:14 PM